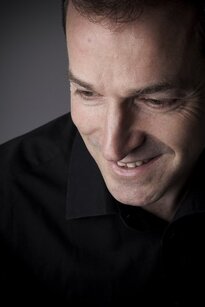 Ben Parry has a busy career as a conductor, composer, arranger, singer and producer in both classical and light music fields. He has made well over 100 CD recordings and his compositions and arrangements are published by Oxford University Press, Peters Edition and Faber Music, including the popular Faber Carol Book. He collaborates regularly with the writer Garth Bardsley: their choral piece Flame was performed by a choir of 300 singers at the Royal Albert Hall in the 2012 BBC Proms and their carol Three Angels by King's College Choir on BBC TV's Carols from King's. Major commissions include the Cathedral Choral Society of Washington DC, St John's College Cambridge, Chelmsford, Norwich, Ely and Sheffield Cathedrals, BBC Singers and the Aldeburgh Festival. Ben's music also featured in the 1st episode of the hit US TV series, Glee. He has composed many track for the production music company, Audio Network, whose music can be heard throughout the world on radio and TV.

Ben is currently Artistic Director and Principal Conductor of the National Youth Choirs of Great Britain, and Director of the professional choir, London Voices. He was formerly a course director for the Rodolfus Choral Courses for 20 years, Director of Music at St Paul’s School and the Junior Royal Academy of Music in London and Assistant Director of Music of King's College, Cambridge. With London Voices, he has performed in concert halls and festivals worldwide. He worked closely with Sir Paul McCartney on his classical choral work, Ecce Cor Meum, as well as conducting on the soundtracks of major films such as The Hobbit, Avengers and Harry Potter. London Voices performed the premiere of Stockhausen’s Mittwoch for the 2012 Cultural Olympiad in Birmingham Festival and Berio’s Sinfonia with the National Youth Orchestra in 2009 and at the BBC Proms in 2014 and 2018.

Ben studied Music and History of Art at Cambridge University, where he was a member of King’s College Choir. Later he was musical director and singer with The Swingle Singers, with whom he toured the world and performed with some of the greatest musicians, including Pierre Boulez, Stephane Grappelli and Dizzy Gillespie. He composed and arranged over fifty pieces for the group and co-produced their albums for Virgin Classics and EMI.

For eight years he lived in Scotland, where he co-founded the distinguished ensemble Dunedin Consort, and was also Director of the Scottish Chamber Orchestra Chorus and Director of Choral Music at the Royal Scottish Academy of Music and Drama. As an orchestral conductor he was worked with the Academy of Ancient Music, Britten Sinfonia, English Chamber Orchestra, London Mozart Players, London Symphony Orchestra, London Philharmonic Orchestra, BBC Concert Orchestra, Scottish Chamber Orchestra, Academy of Ancient Music, Royal Symphony Orchestra of Seville, The Scottish Ensemble and the Vancouver Youth Symphony. He conducted five productions from 1999 as Music Director of Haddo House Opera. He has sung with the Gabrieli Consort, Taverner Consort and Tenebrae, as well as on countless film and TV soundtracks. He appeared on the West End stage in the UK premiere of Cy Colman's musical City of Angels in 1994.

Ben was made an Honorary Associate of the Royal Academy of Music in 2014 for his services to the music industry.